If you are experiencing a bug or any kind of problem in game, please provide a description of the problem or bug and send an e-mail to the following address below.

Today, we want to announce our latest updates!

We will continue improving on the fish behavior to replicate a real world fishing experience in VR!

2. Added all seasons for “Small Lake”

Spring, Summer, and Autumn are now available in “Small Lake”!

Graphics quality has been improved too. Check it out and see the difference!

We are constantly working on ways to improve Pro Fishing Challenge VR in all kinds of areas. Look for more updates and additions in the near future.

In this update, we’ve fixed the tournaments section and it’s now available again.

2 different kinds of tournaments are held:

Check details from the link below.

Also,all players can now check your records in the game.
Check the tablet and press “Activity” through “Player” button to see it!

Did you know that Pro Fishing Challenge VR now has online tournaments?

There are 2 different kinds of tournaments held:

Daily tournament which is held 3 times a day

Rank tournament which is held once a week

If you win a tournament, you’ll get a large amount of

credits and experience in game.

What is the Daily tournament?

It’s a tournament held 3 times a day.
Each tournament is held for 2 hours. You can join all
3 tournaments in a day.

Daily tournament is available to all at the beginning of the game
so everyone can enjoy it.

During the tournament, you are allowed to try fishing once
in a given lake.

Catch as many of the target fish for the tournament as possible. The time limit is 15 minutes.

You’ll compete by the total weight of the fish you’ve caught.

If you’re ranked in the top 10, you’ll win credits and experience in the game.

What is Rank tournament?

It’s a tournament held once a week.

Each tournament will be held for a whole week.

Rank tournament will be available when you reach level 10.

It’s for anglers getting used to the game.

In this tournament, anglers will be separated by their rank, which is defined by their score in the tournament.

Your rank changes according to your score.

As a result, good players are likely to reach to a higher level

so it’s easier to compete with a player who ranks with you.

There are 5 different ranks and you win a larger prize as you get to a higher rank.

You are allowed to challenge 4 times during the tournament.

score will be determined by the total weight of the target fish you’ve caught.

You can win a prize if you rank in the top 10, but you must also rank up and increase your score so that its high enough to move on in the tournament.

The scoring judges whether your rank goes up or down.

There is a low score and a high score.

If your score is higher than the high level marker, your rank goes up.

If your score is lower than the low level marker, your rank goes down.

If your score is between the marker, your rank doesn’t change.

Also, if you pass each level marker, you win credits and experience.

You don’t have to rank in the top 10 to win prizes.

When rank tournament is available, your rank is not defined yet,

so you have to play the pre-tournament to get your first rank.

Beginner, Angler, Pro, will be rewarded according to your score.

If you’re going to try fishing in an given lake.

You can only try it once and the time limit is 15 minutes.

You are judged by how many fish you’ve caught in the tournament.

<29/08/2017>
Thank you for giving us such helpful feedback. We are listening and going to make
changes from high-priority tasks.
In this update, we’ve added a rent boat for Fall Bridge Lake.
It’s completely free to use, so have fun!
We’ll continue gathering feedback and make improvements so that
everyone can have a great experience through Pro Fishing Challenge VR. 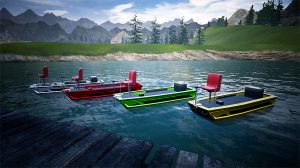 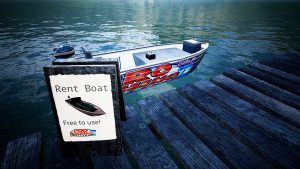 This update brings a complete overhaul of the tutorial.
It can be started from the new title screen, make sure to check it out.
A new microtransaction shop was placed on the second floor of the lodge.
Many new items and goods are waiting for you!

Detailed change log:
– Added a new tutorial menu on the new title screen
– Store character progress and inventory on the PFC Online Service (server)
– New modeling of all tackles, hands and wristbands
– Added damage property to tackle, use the workbench to repair your stuff
– Added fuel system to the boat, use the button at the driver seat to refuel
– Changed the starter boat to the electric boat
– Added display of the boat owners name on the fish finder screen
– Added microtransaction currency ‘Tickets’ and a corresponding shop
– A new lake, gloves, wristbands, boats and a ‘Pro Mode’ can be purchased
– Removed arms of the character models due to disparity with users movement
– Disabled tournament feature until further notice